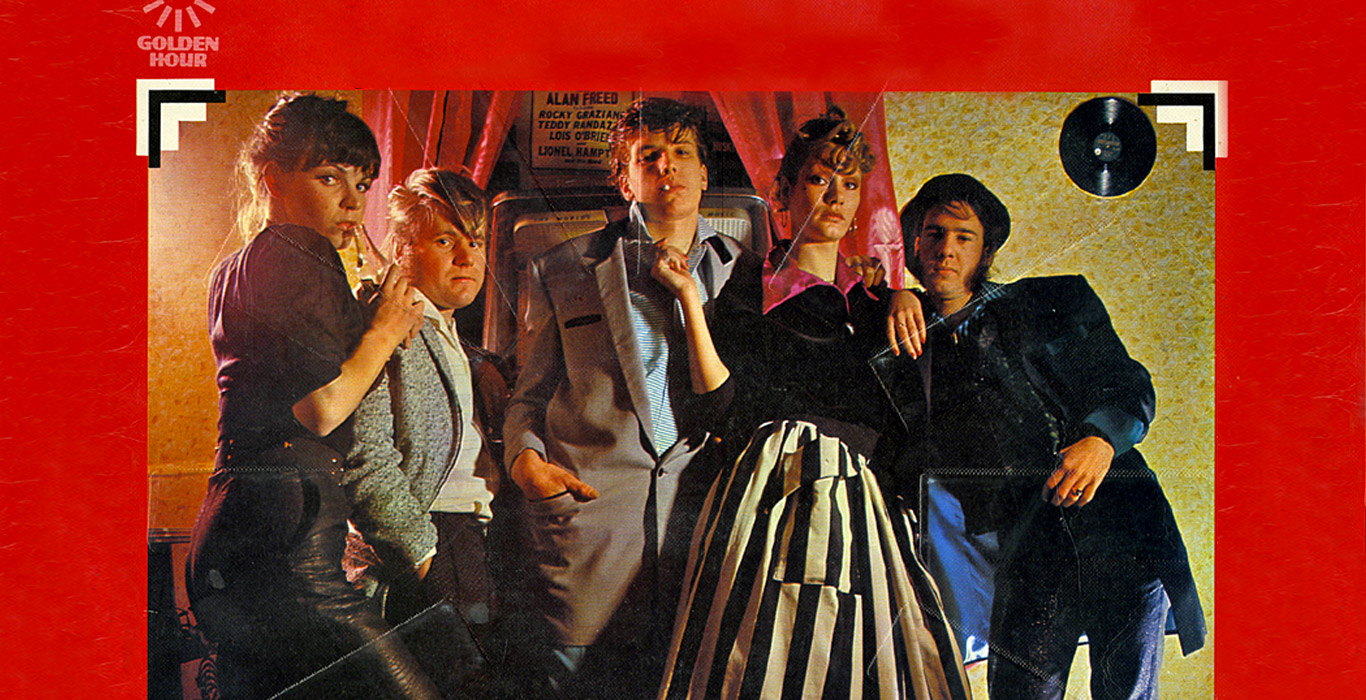 I’ve just dug out this record. I’ve seen it all my life but I have had it since my grandmother Dora died 5 years ago. She had it in her record collection since 1973 when it was released. 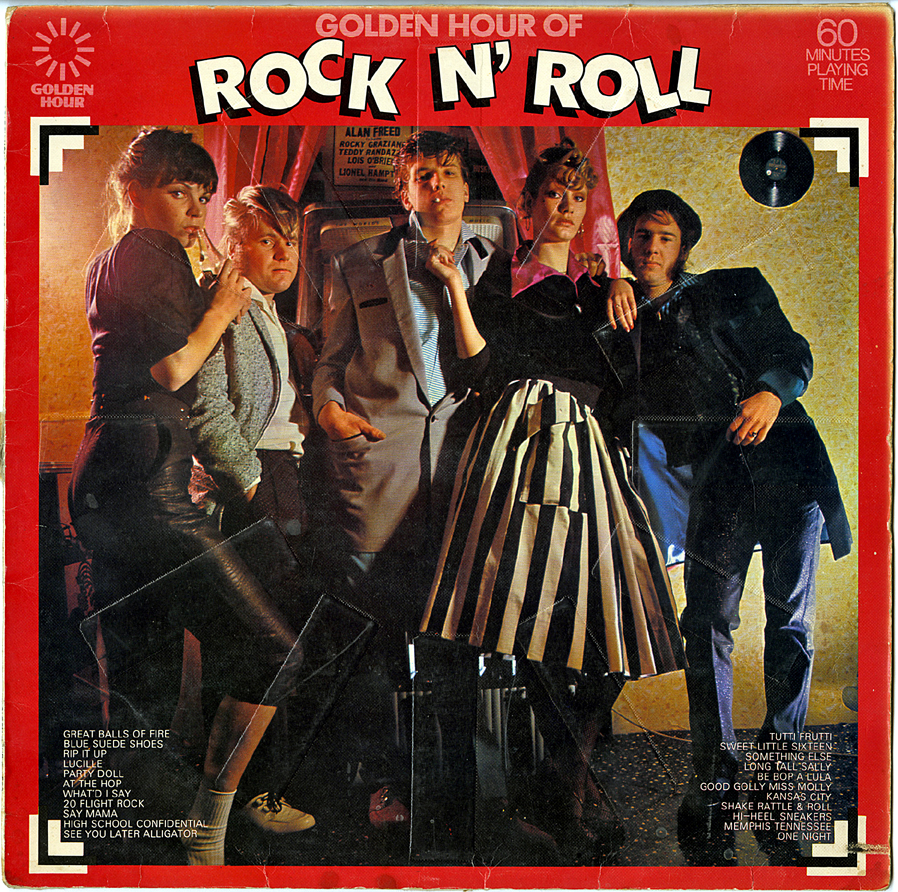 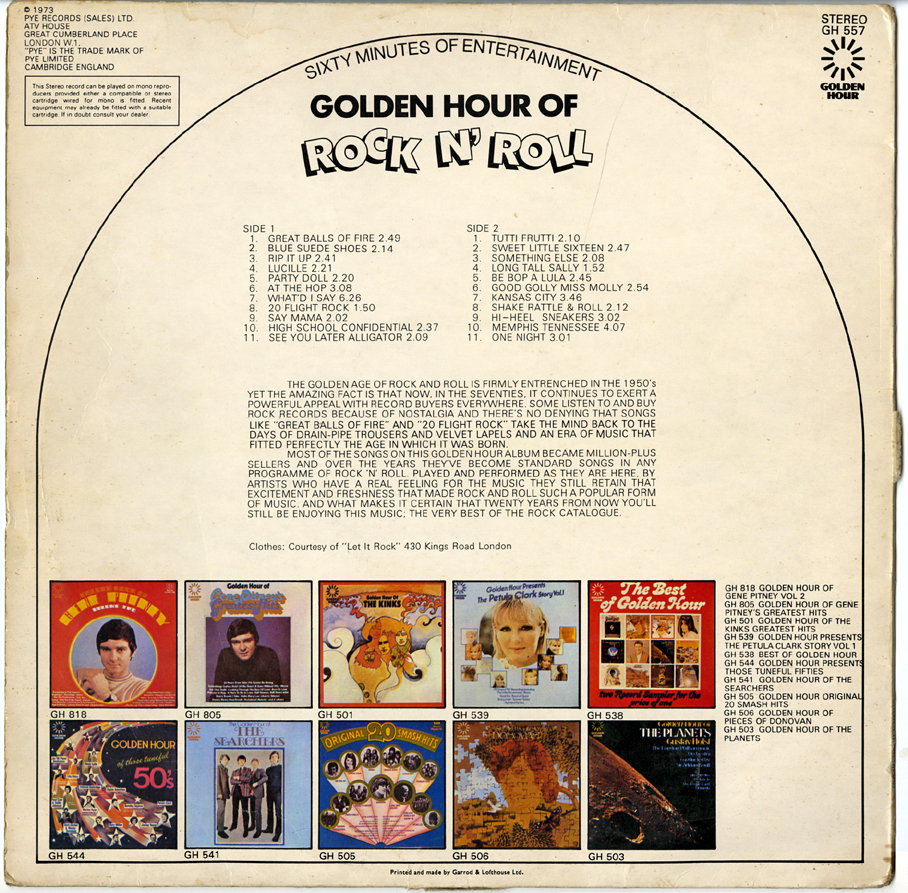 I suppose my mother gave it to her as Dora liked rock & roll but the main reason she kept it was because the cover is shot inside 430 Kings Rd when the shop was called ‘Let it Rock’ & it is styled with all the clothes that the shop sold then.
I showed Vivienne the record & she said that she remembered that a lot of people had used the clothes from ‘Let it Rock’ for photo shoots at the time & that yes these were all her & Malcolm’s designs except maybe the grey jacket on the man second from the left. She remembers that she personally made the black & white striped skirt & that it was made out of corduroy. The other clothes she didn’t necessarily make herself as she & Malcolm of course got other people to make things as well.

In showing the record to Murray here at the office he realised that he had some old photos of ‘Let it Rock’ stuff as well in an old magazine from 1974 called ‘Honey & Vanity Fair’ so these are shown here too. In the photos are the same striped skirt, a selection of skin tight jeans & several zip-tit tops (the zip-tit top is not a copied idea from the 1950’s but more a precursor to the Westwood/McLaren designs of the later 1970’s).

Another place where the clothes were used was in the 1973 film ‘That’ll be the Day’. In this film the singer Billy Fury (one of Malcolm’s favourites) is wearing some of the clothes. 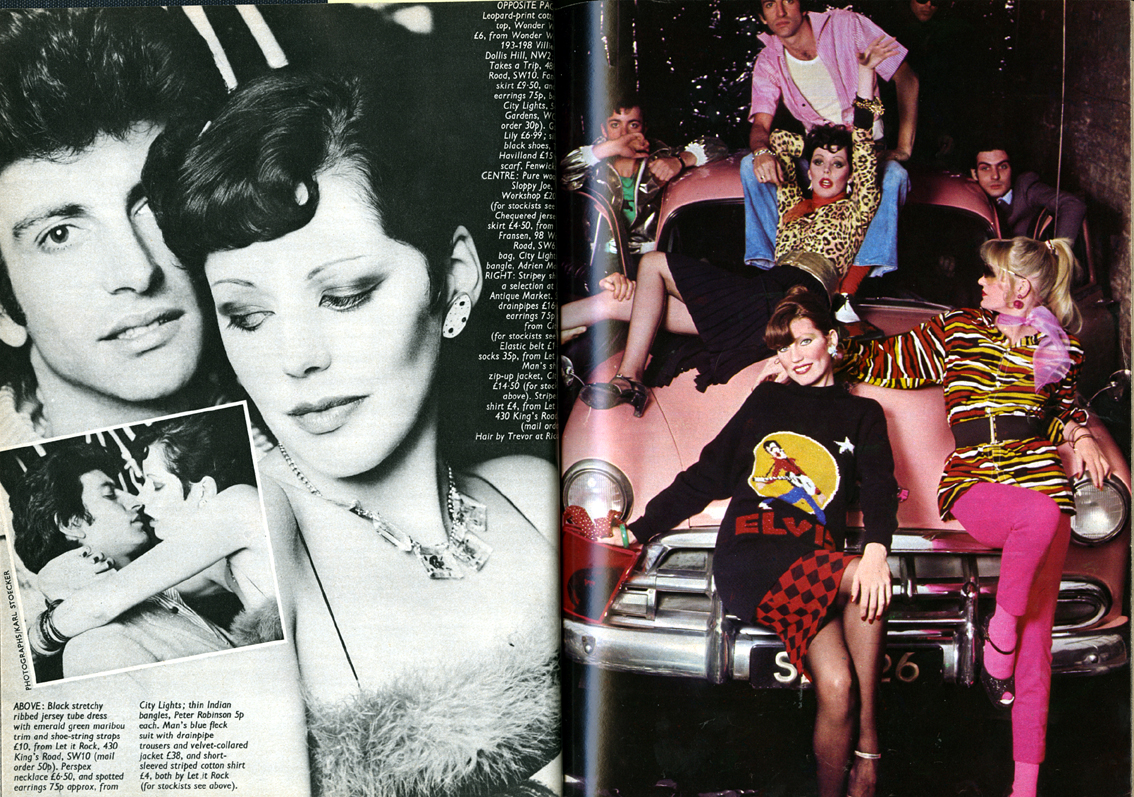 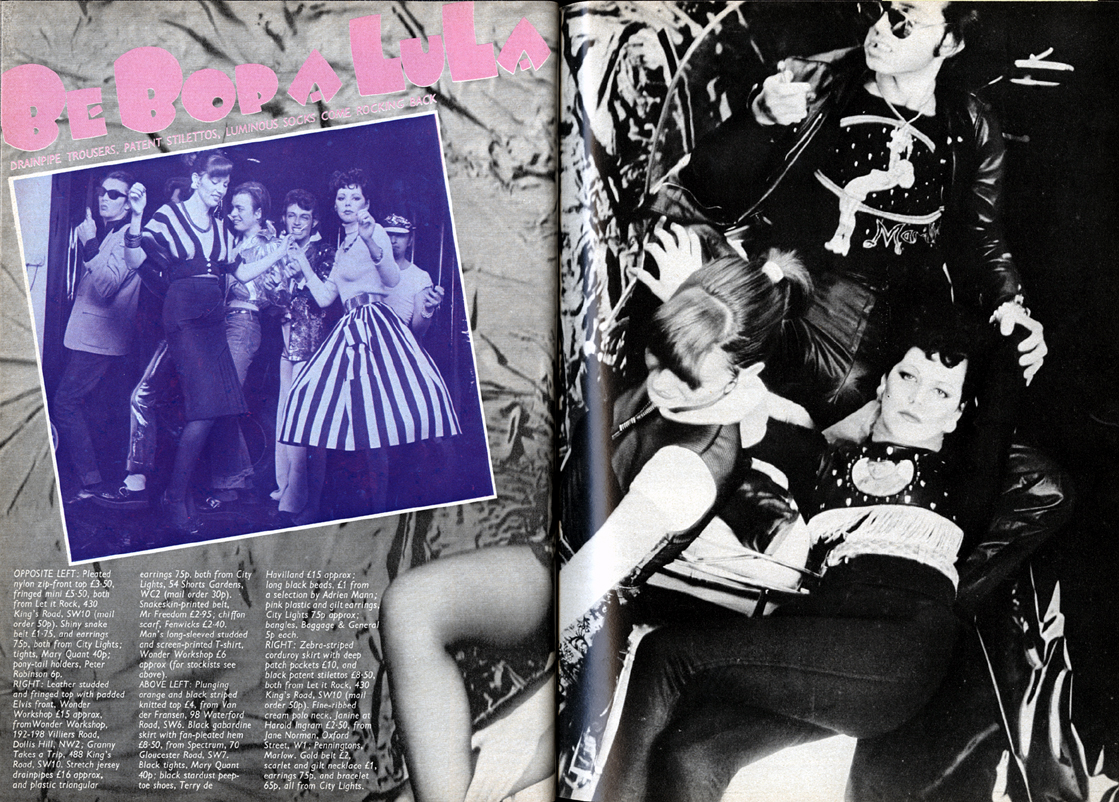 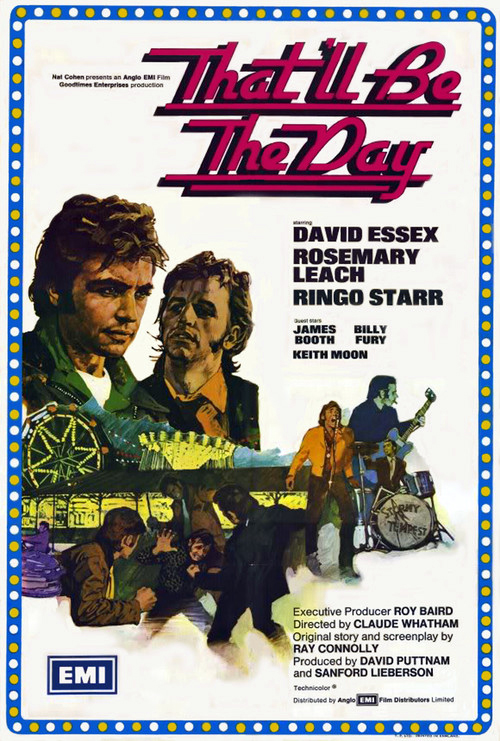 That’ll be the Day Movie Poster 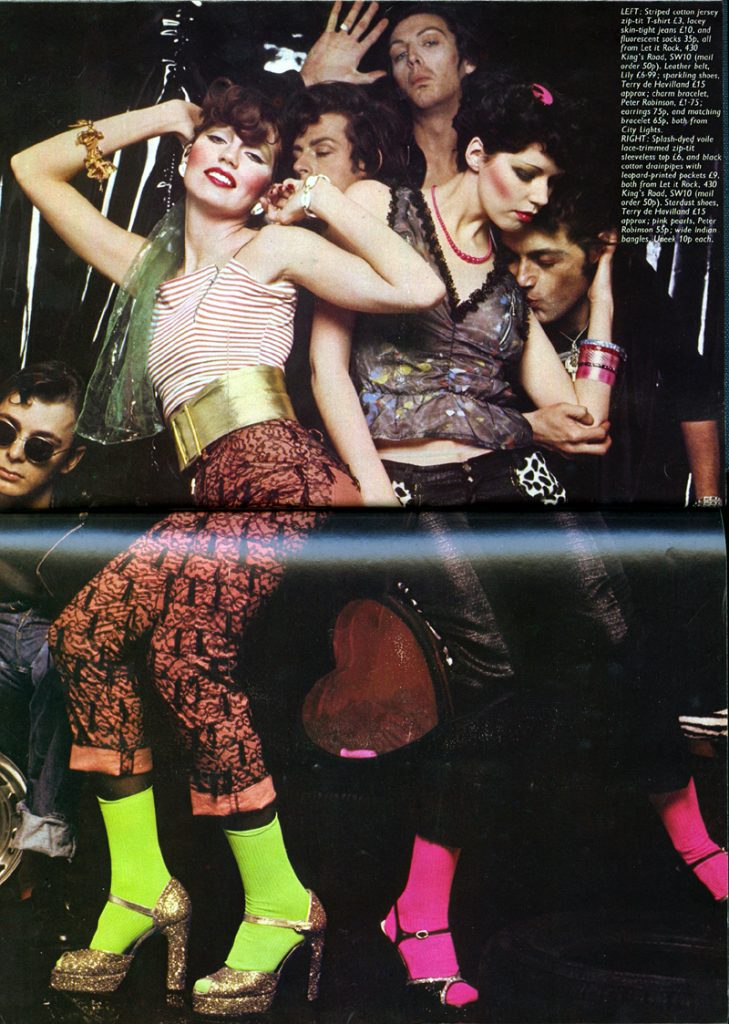 Some more images I found from the time show Malcolm selling ‘Let it Rock’ clothes at the ‘London Rock ‘n’ Roll Show’ at Wembley stadium on the 5th August 1972. This was the first ever music show at Wembley by the way & had Jerry Lee Lewis, Little Richards & Screaming Lord Such in the line up (If you want to watch the film here is the link . The bit with ‘Let it Rock’ is 21.30 minutes into the film). 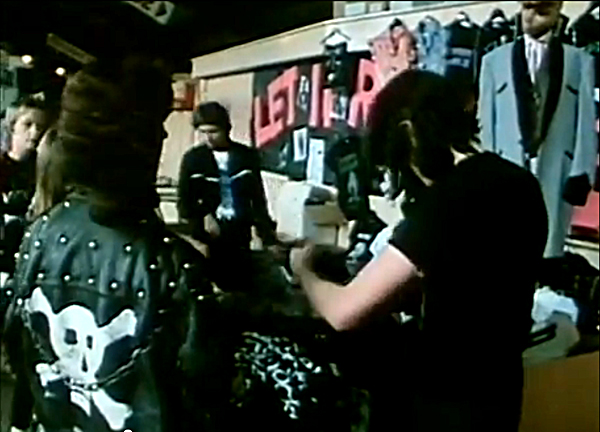 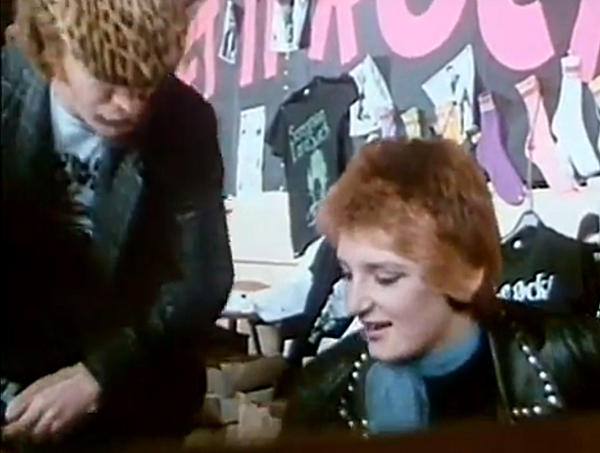 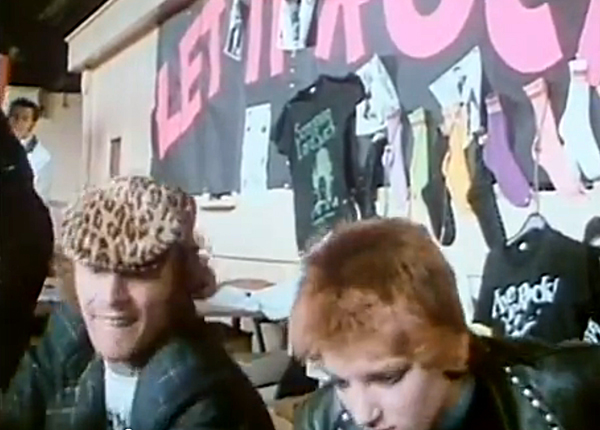 However Malcolm was already getting bored with the shop. In a newspaper interview in 2004 he recalled: “For me, the answer lay at my first store on 430 King’s Road, where I sold the ruins of pop culture – a jukebox stood proudly in the centre of the store. Among this rock’n’roll debris of posters and memorabilia and old records, stood some fine ancient jackets in leather, velvet and tweed resembling clothes worn by such dead stars as Eddie Cochran, Gene Vincent and the Shangri-Las.
All of this stuff was situated in a field of glitterdom that I had named Let It Rock in 1972. Within a year, I was bored with it all. Bored with the same surrogate suburban teddy boys that drifted in from God knows where. Bored with the hippies and refugees of Chelsea’s swinging 60s looking for charity and kindness. Bored with the demands of the BBC wardrobe department and their dreadful revivalist TV shows. I felt like Steptoe and Son. I was lost in dead tissue. I wanted something new.”

P.S. Last year during the World’s End shop refurbishment I happened to see through the access panel in the lowered ceiling. The yellow section of roof visible in the below photo is from ‘Let it Rock’…… 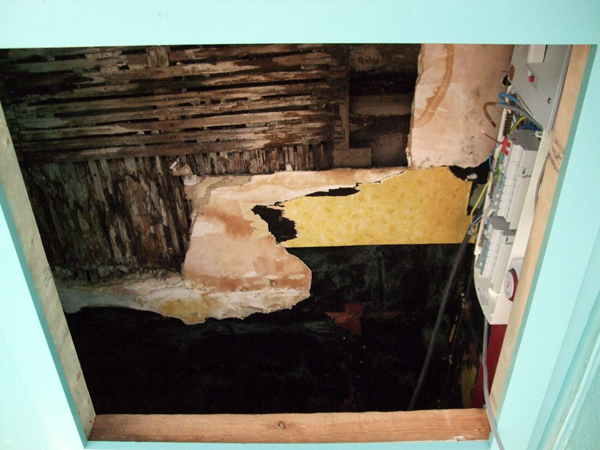