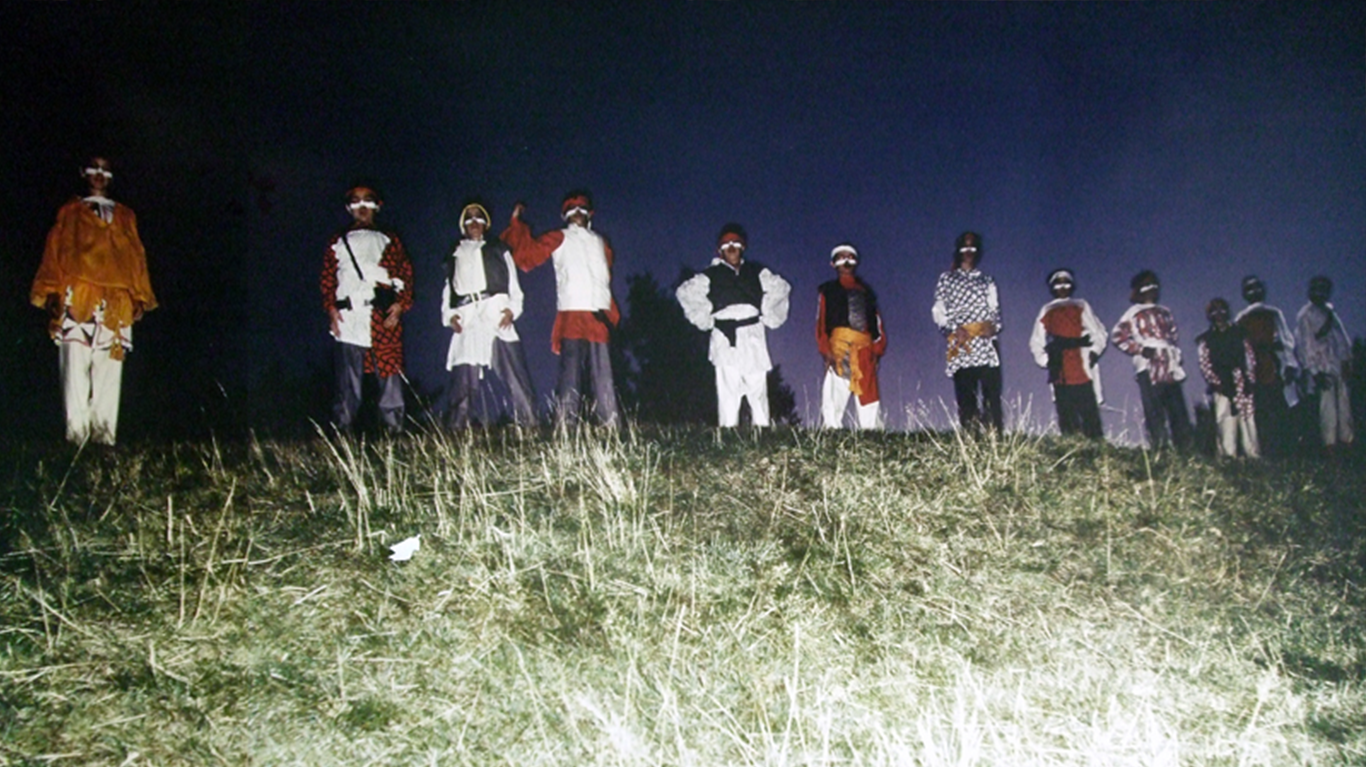 Indians
BACK TO POSTS
Westwood World

An old favourite is back in the World’s End shop, squiggle & Indian print tops first shown in the 1981 Pirates & 1982 Savages collections respectively. 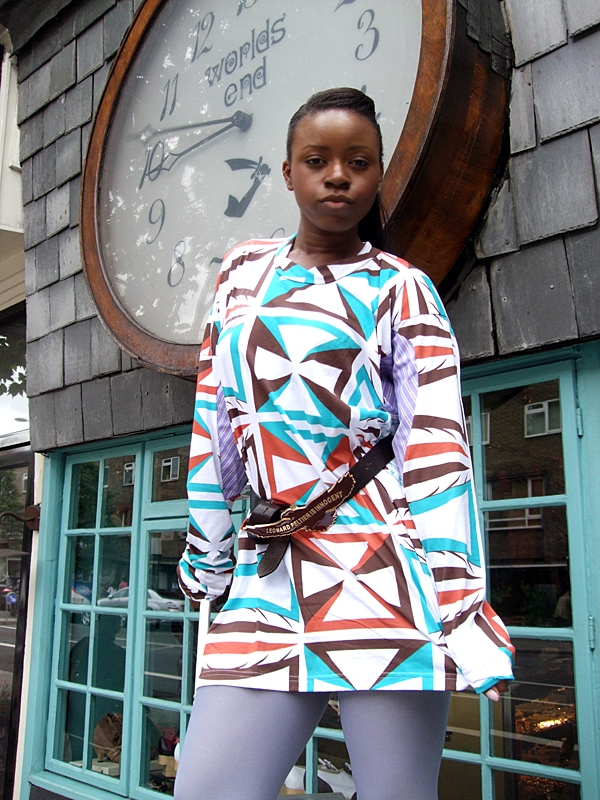 An early example of the asymmetric method of cutting & making a garment, the neck hole for the head is not centrally placed, but is placed instead about 6 inches to the side & lower down the front of the top from the normal thereby creating a rumpled/creased effect & the top hangs off the shoulder creating a new dynamic with the fabric pushing & pulling against the body.
The prints used were sourced at the time, squiggle from a wood block print that Vivienne & Malcolm found at the studio of their friend/designer Jean-Charles de Castelbajac & the Indian print from a book they had, these specific artworks coming from North American Indian saddlebag designs (the NA Indians would paint the design on the leather skin first & then sew the bag afterwards).
The back panels of the tops with the small triangle & dot print was developed by Vivienne & Malcolm out of their heads based on a heraldry look.
At the time in 1982 there were two other Indian prints used one of which is shown in the below photo.
One of the latest customers to buy the top is another ‘old favourite’ of ours, a Mr Steve Jones, formerly of ‘The Sex Pistols’ (the name could have been made especially for him as he has had sex with everyone. My mum said that when she first met him his bedroom wall had a display of women’s panties hanging up & when he borrowed my mum’s Mini car I found a pair of red see-through panties in the glove box which he had used to clean the windows). Steve has kindly sent us this photo of him wearing the top.
Steve must have first bought a squiggle top from me the one time I went to America in 87 as when I went I took some of the new shop stock of the time with me in order to sell it there. I’d always liked Steve & made it my mission at the time to find him in LA as nobody had been in touch with him since 1980 when punk had disintegrated.
Also worn a lot & made popular by Malcolm’s band BowWowWow the tops sell at £165.00 & are available in three colour ways of squiggle & one colour way in the Indian.
I’m including a photograph in this post which has been hanging in the shop since 1982 when it was taken for the Savage collection. My personal interest in it is because I am the model standing 7th from the left in the photo & my brother Joe is the 5th from the left. The other kids in the photo are our friends from Balham rounded up for the shoot in Hampstead Heath. The photo is composed to recreate the look of ‘the Indians’ coming up from behind the hills for an ambush.
The other photo in this post is of shop assistant Lindy who kindly got up a ladder outside the shop to model the Indian print top. ThanX Lindy 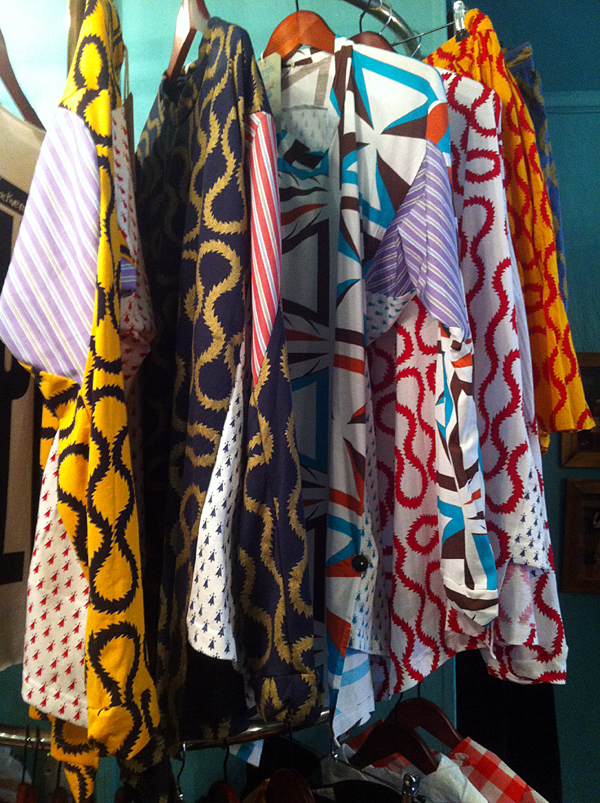 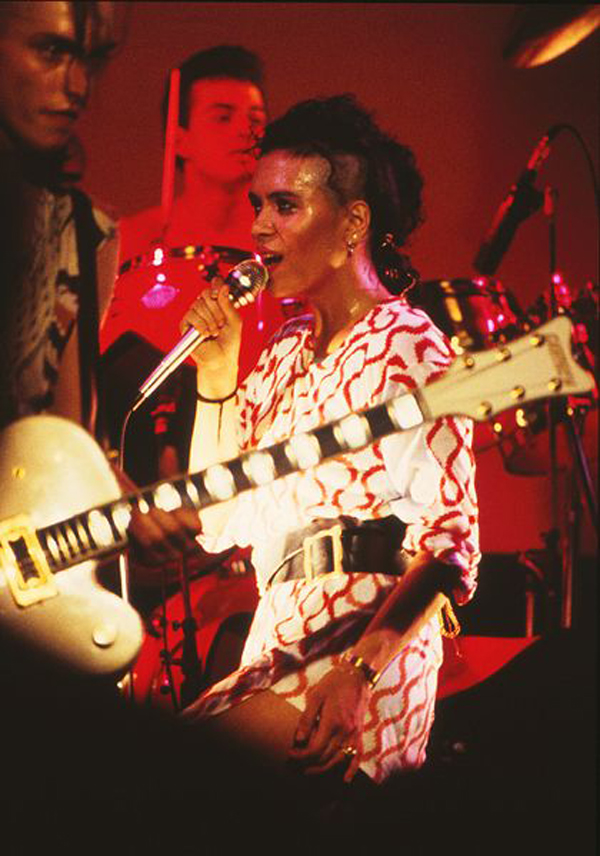 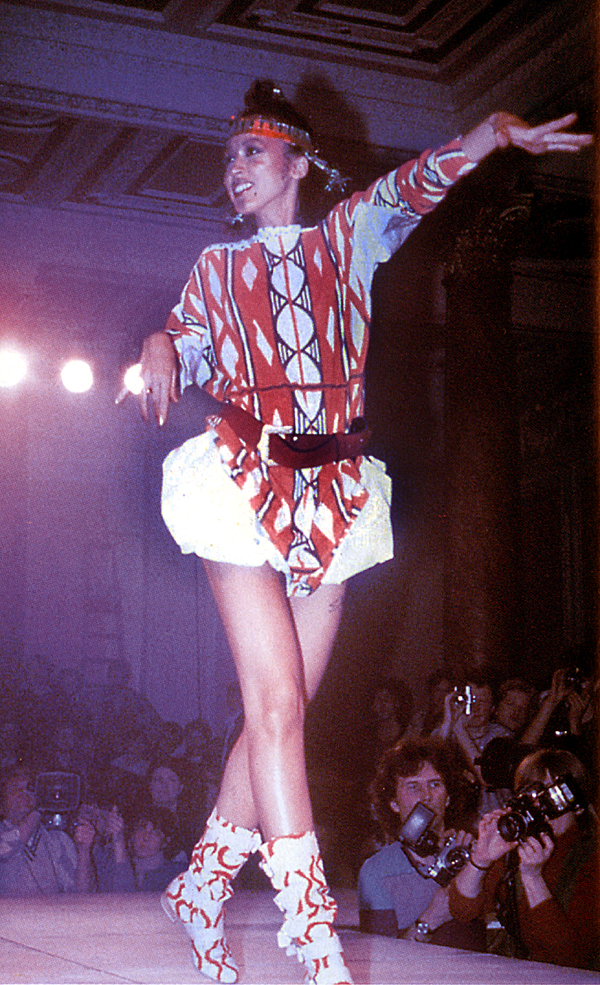 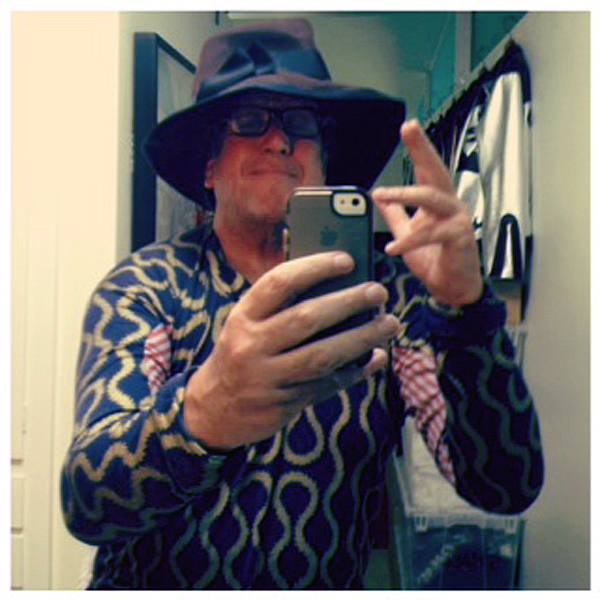