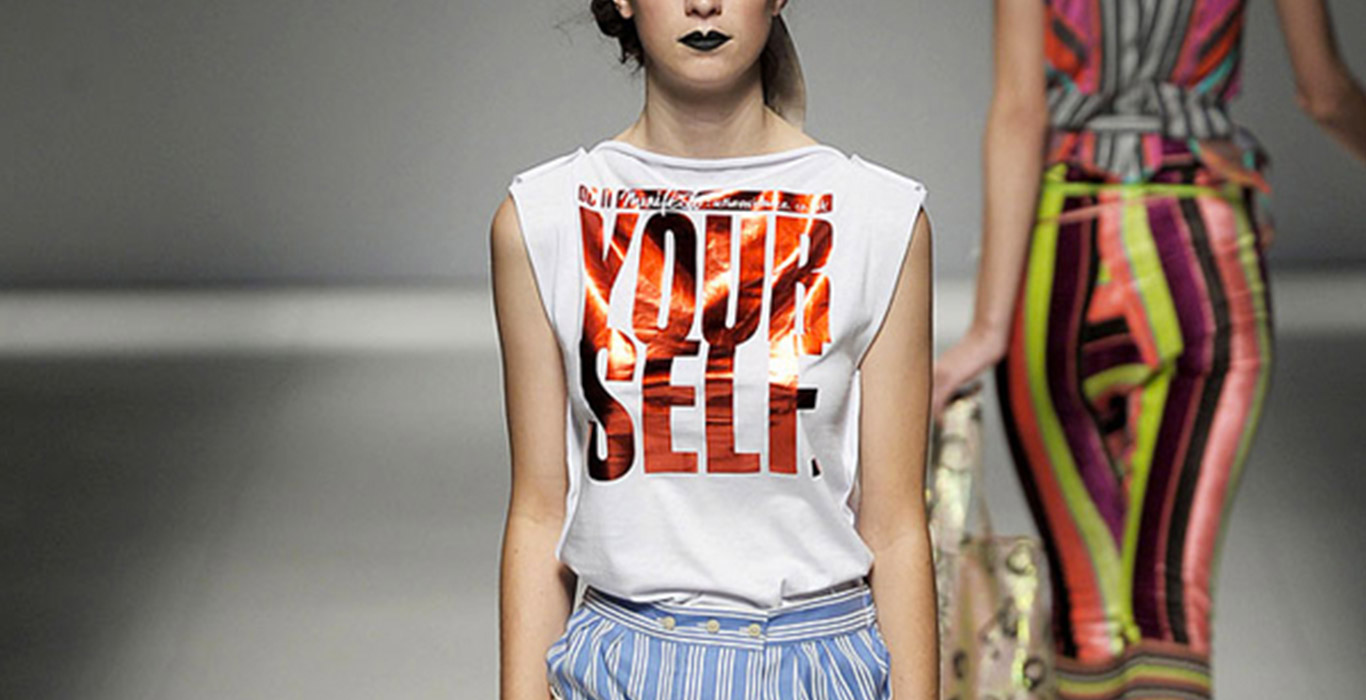 For the s/s 09 ‘Do it Yourself’ Gold label fashion show in Paris in October 08, a rough square t-shirt was reintroduced.

A very simple t-shirt in its construction, being in essence two squares (or rectangles) sewn together at the sides & shoulders (leaving holes for the head & arms), the t-shirt featured edges not turned inside (bagged) & not over locked but still of strong construction & the edges do not fray. The design perfectly reflected the ethos of the collection (see below) as these t-shirts could be made by anybody (you wouldn’t really even need to use a sewing machine, the edges could be safety pinned together for instance).
Although this was the first time these t-shirts were shown on a catwalk it was not an original idea as this design had first been developed by Vivienne in 1974/5 for her & Malcolm’s incarnation of the Kings Road shop as ‘SEX’ which promoted fetish rubberwear & pornographic imagery in an attempt to shock the rather stuffy establishment of the time (& shock it did. I remember a news story about a man who had been arrested under the obscene publications act because he was walking up the Kings Road wearing a nude ‘Cowboys’ print. He had been stopped & told to take it off straight away & when he refused he was arrested. After this the shop suffered several months of weekly raids by the police who would confiscate the entire stock every time only for it to be immediately replaced after they had gone by more t-shirts kept in bin liners in the upstairs toilet. The shop was not making much of a profit at this time but the ‘message’ was being made & you won’t get into so much trouble wearing them now)
The first square t-shirt was created because one of the prints Vivienne & Malcolm wanted to produce was an extract from some pornographic/fetish literature of the time (the t-shirt was called the ‘I groaned with pain’ after the first line of the script) & being written on a rectangular page Vivienne thought of the idea of making the t-shirt square as well (below is a photograph where you can see Paul Cook, the drummer of the Sex Pistols who is on the left wearing one).
Other prints which were produced included the aforementioned ‘Cowboys’ print as well as the ‘Tits’, ’Baseballer’(nude), ‘Vive le Rock’, ‘Fuck’(with nude young man smoking cigarette), ‘Destroy’, ‘Cambridge rapist’ & the ‘You’re going to wake up one morning & know what side of the bed you’ve been lying on’ which then had a list of ‘good’ people & ‘bad’ people.
The rough design also reflected the punk ethos of the time which already advocated making your own outfits.
Back to the present day & in World’s End now we have the ‘Climate Revolution’ print. In the shop for about the last six months, you may already have seen it. It’s the one that was made to do the climate revolution stunt at the Paralympics last year & was sub sequentially given to Lady Gaga who wore it for her visit to Julian Assange at the Ecuadorian embassy last year.
Next week three new/old versions will be available to add to this revisited classic, ‘Tits’, ‘Cowboys’ & ‘Chaos’ & then later this September two new designs will be added, the ‘69 print’(with lightning bolt on the reverse) & the new ‘Do it Yourself’ print. Both of these later t-shirts will be lot larger than the previous ones & can therefore also be worn as a dress if you should so wish.
………..& hopefully you won`t be arrested for wearing them. Good luck 🙂 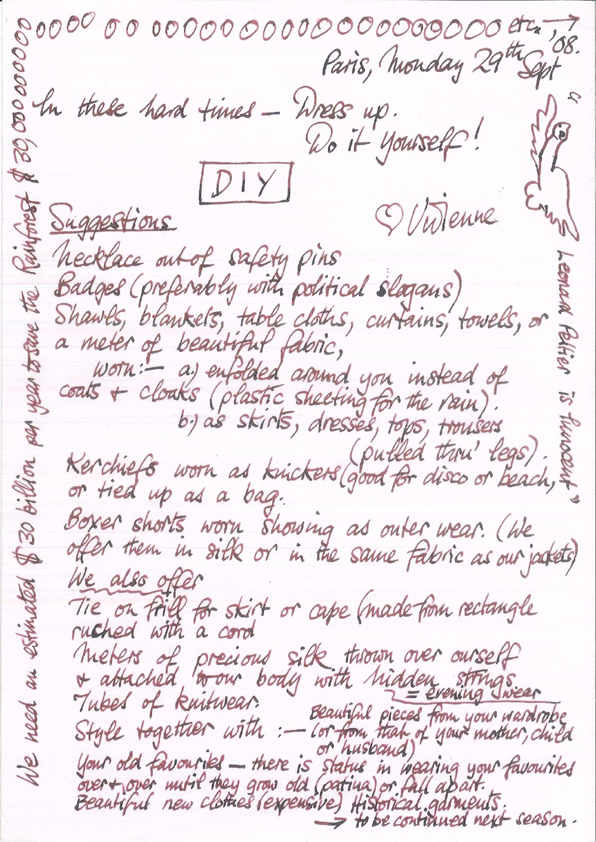 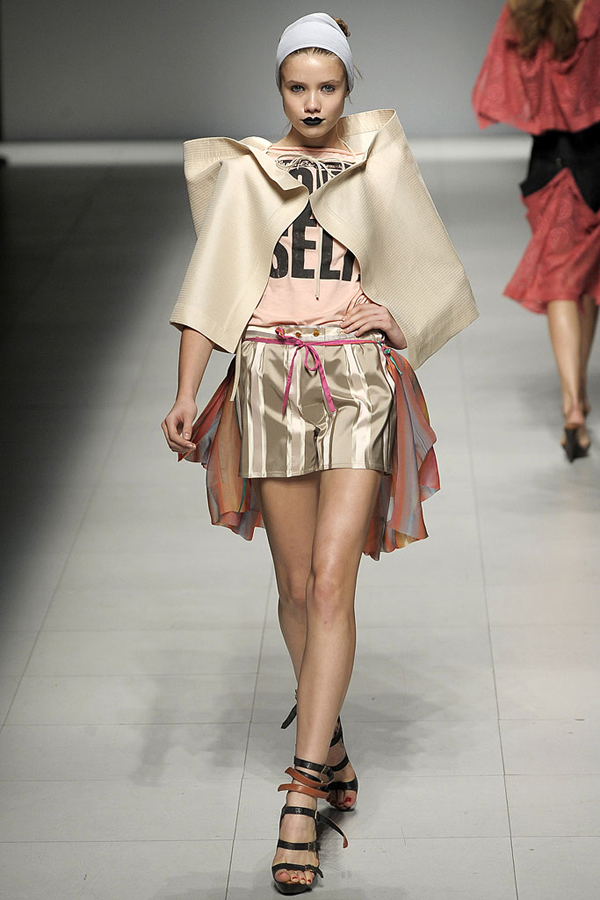 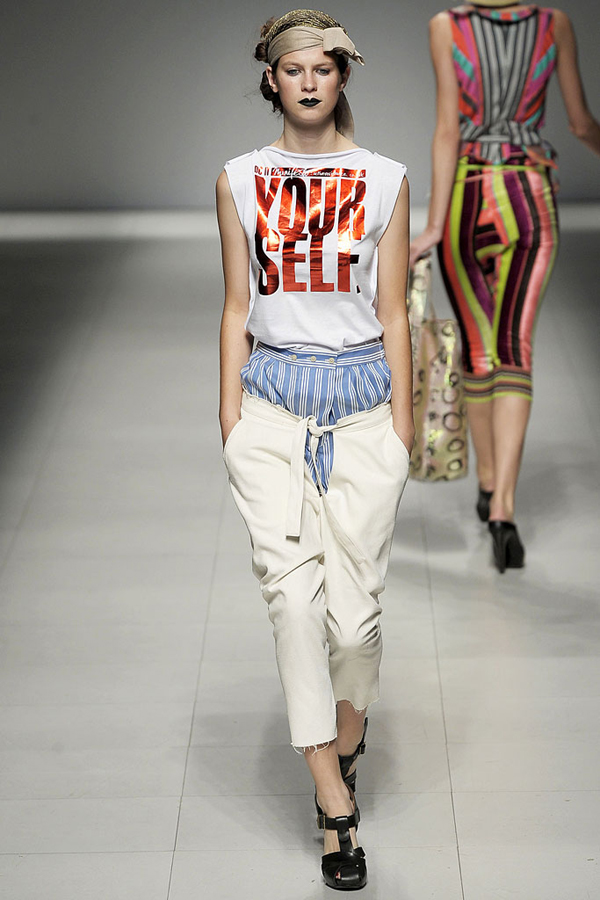 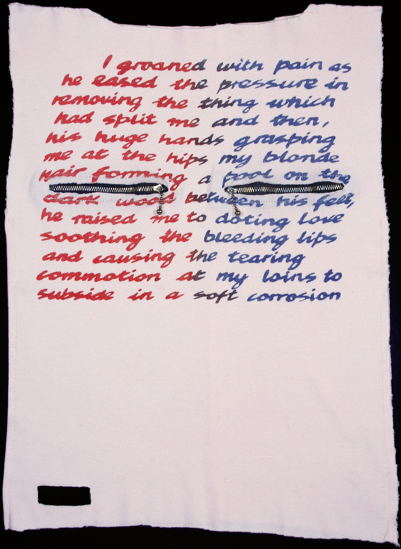 ‘I groaned with pain’ 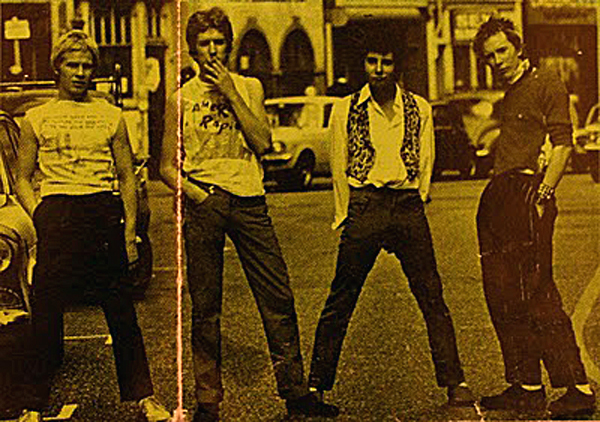 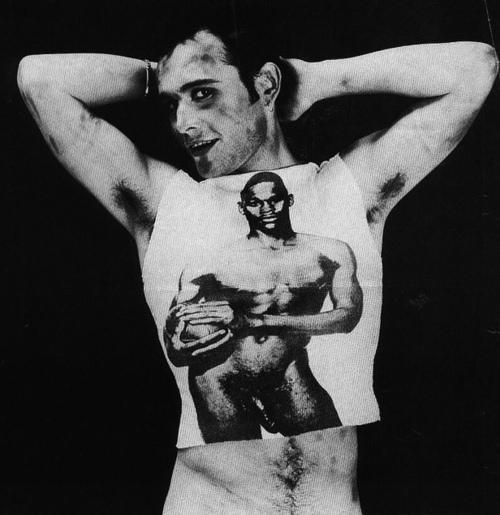 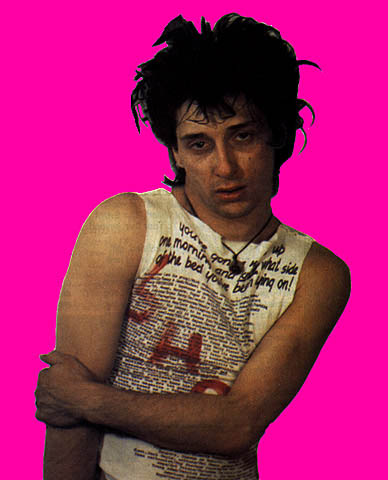 ‘You’re going to wake up one morning’ t-shirt 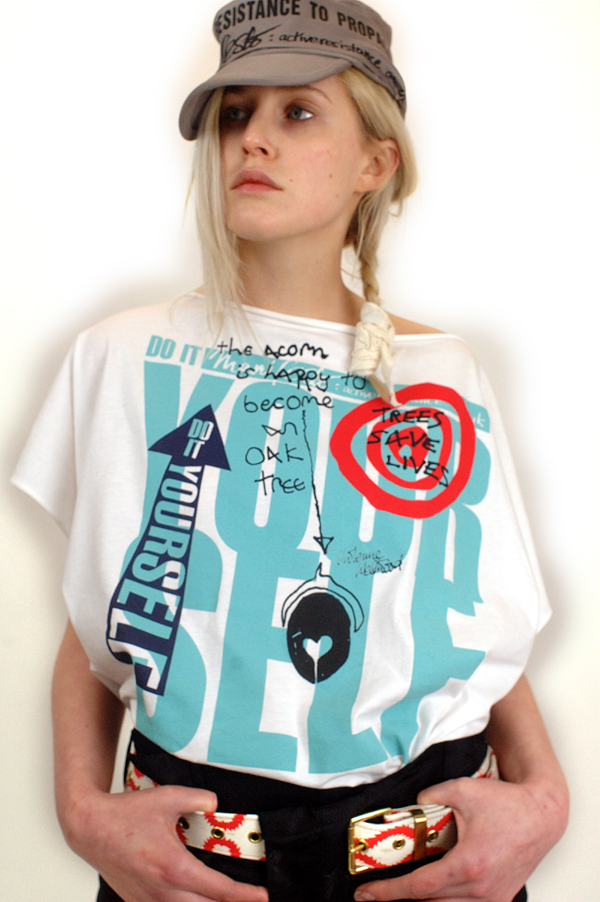 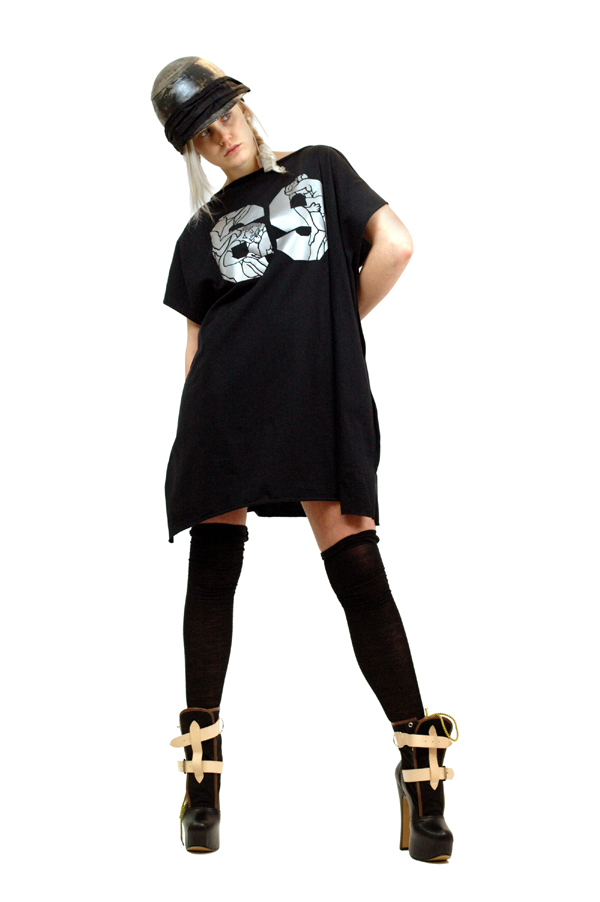 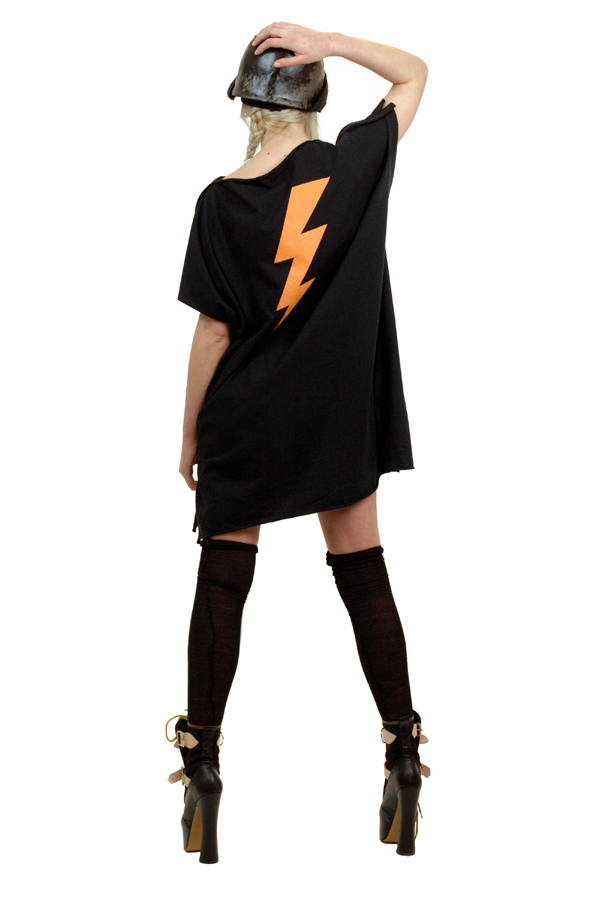 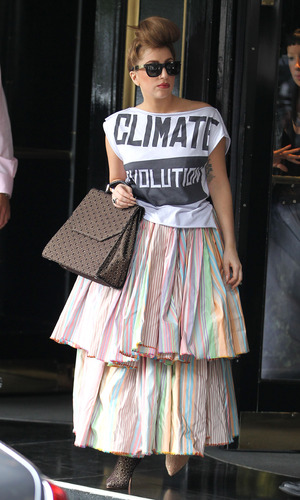