The hippie movement was the most popular fashion in late 1960s London, but it didn’t inspire young Vivienne Westwood and Malcolm McLaren. They were much more intrigued by acts of rebellion and typical 1950s clothing, music, and memorabilia.

Vivienne began by designing and making Teddy Boy clothes for Malcolm and in 1971 they opened a small boutique called Let it Rock at number 430 Kings Road, Chelsea in London.

A year later, Vivienne’s interests had turned to biker clothing, zips, and leather. The shop re-branded with a skull and crossbones and was renamed Too Fast to Live, Too Young to Die.

Vivienne and Malcolm began to design their own t-shirts with provocative printed slogans, which led to their prosecution under the 1959 Obscene Publications Act; they responded by re-branding the shop once again and producing even more t-shirts featuring hard-core images.

By 1974 the shop was renamed Sex, a shop “unlike anything else going on in England at the time” they used the slogan ‘rubberwear for the office’. 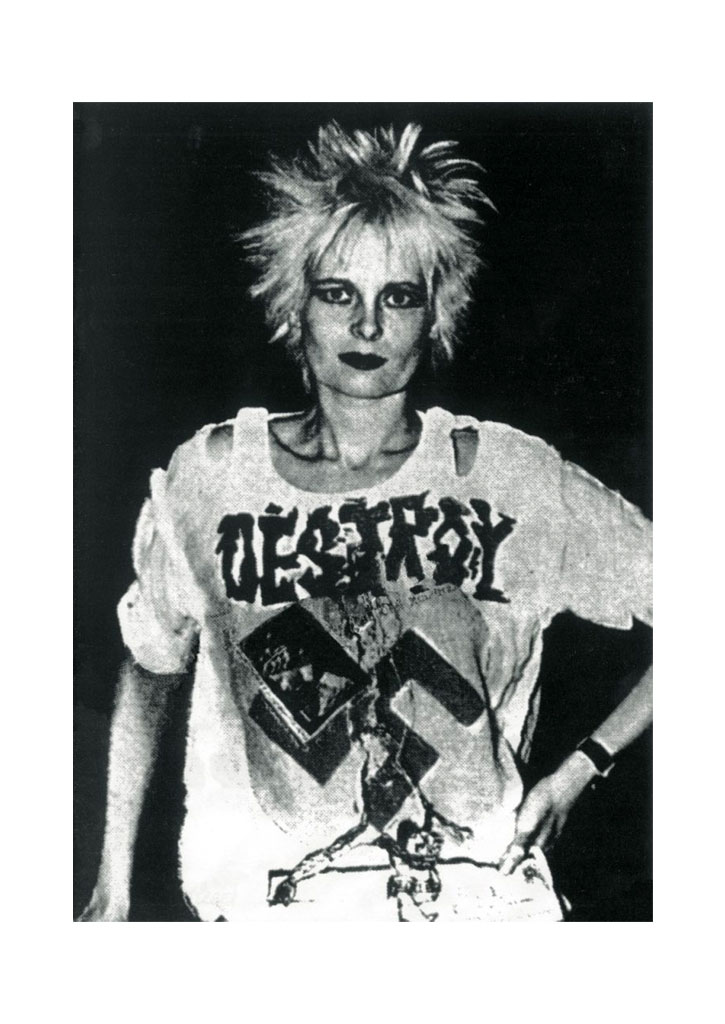 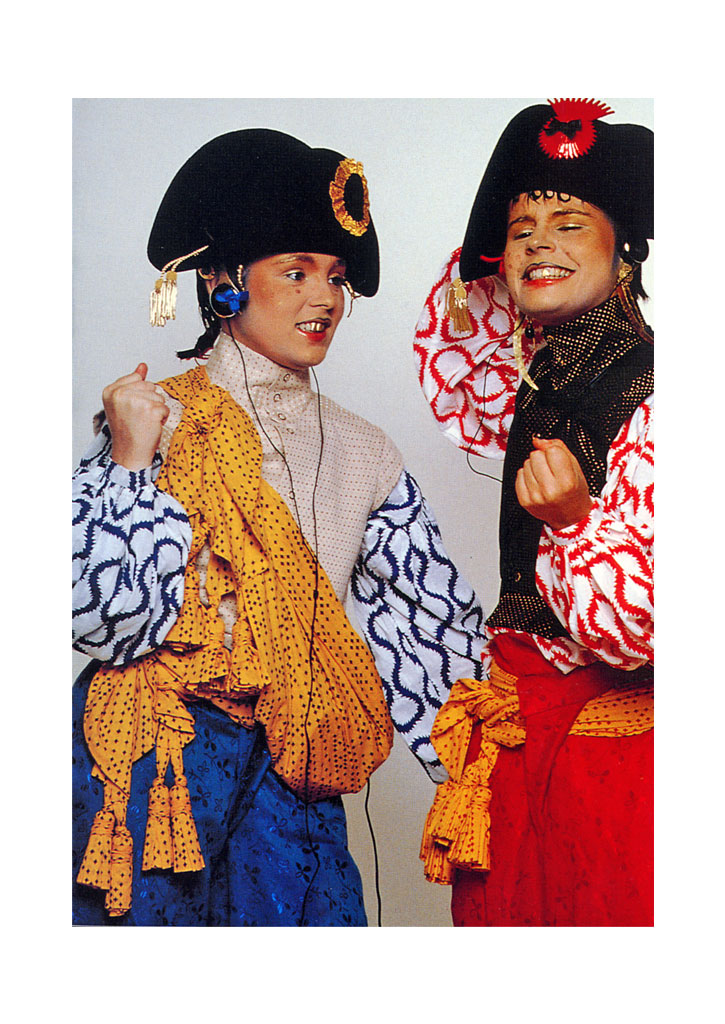 In 1984 the Nostalgia of Mud shop (now known as Worlds End) closes in West London and Vivienne relocates to Italy.

Vivienne Westwood opens another London boutique on Davies Street in 1988.

In 1986 the orb logo was first used to symbolize taking tradition into the future.

The 1981 ‘Pirate’ Collection was Vivienne Westwood and Malcolm McLaren’s first official collaborative catwalk show. It informed the aesthetic of The World’s End Boutique with its pirate’s galleon and ship features. This collection was filled with romantic looks in gold, orange, and yellow which burst onto the London fashion scene, ensuring its place in the house’s history of influence.

‘We’ve only stopped to note significant innovations, otherwise, the ideas carry through and develop throughout the collections.’ ‘Pirates’, Autumn-Winter 1981/82 was their first catwalk show. Looking at plundering history and the Third World. The research was into historical dress, keeping the original cuts as fashion. Inspired by Native American patterns, the ‘Pirate’ trousers had a baggy bum, in complete contrast to hippy hipsters and ‘tight arses’ of the time. The position of the neck when worn, was asymmetrical.

Vivienne is appointed as Professor of Fashion at the Vienna Academy of Applied Arts from 1989 to 1991.

In December 1990, the Davies Street boutique opens in London’s Mayfair.

Vivienne receives an award for Fashion Designer of the Year for two years in a row in 1990 and 1991 by the British Fashion Council.

Vivienne receives an O.B.E at Buckingham Palace from her Majesty Queen Elizabeth ll in 1992.

Vivienne introduces wedding gowns into her collections in 1992.

In 1992, Vivienne is made an Honorary Senior Fellow of the Royal College of Art (RCA).

Vivienne marries Andreas Kronthaler in 1993, whom she met in 1988 whilst teaching in Vienna.

During this period Vivienne’s heroes shifted from punks and ragamuffins to ‘Tatler’ girls wearing clothes that parodied the upper class. A chance encounter inspired one of her most important and influential collections, Autumn-Winter 1987 ‘Harris Tweed’. “My whole idea for this collection was stolen from a little girl I saw on the tube one day. She couldn’t have been more than 14. She had a little plaited bun, a Harris Tweed jacket, and a bag with a pair of ballet shoes in it. She looked so cool and composed standing there.” 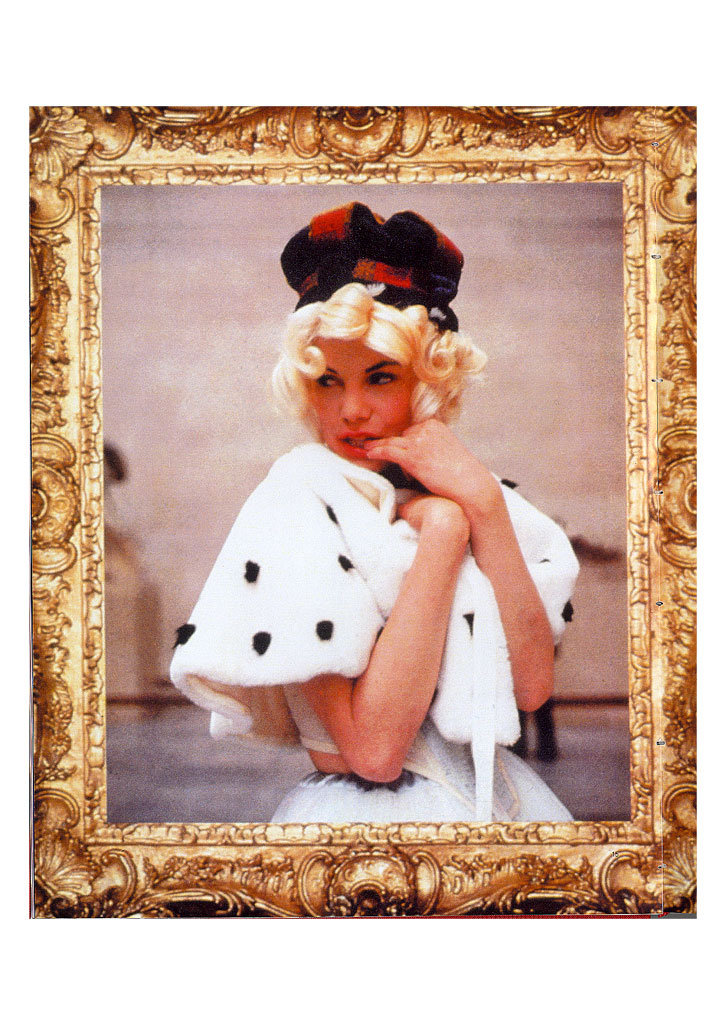 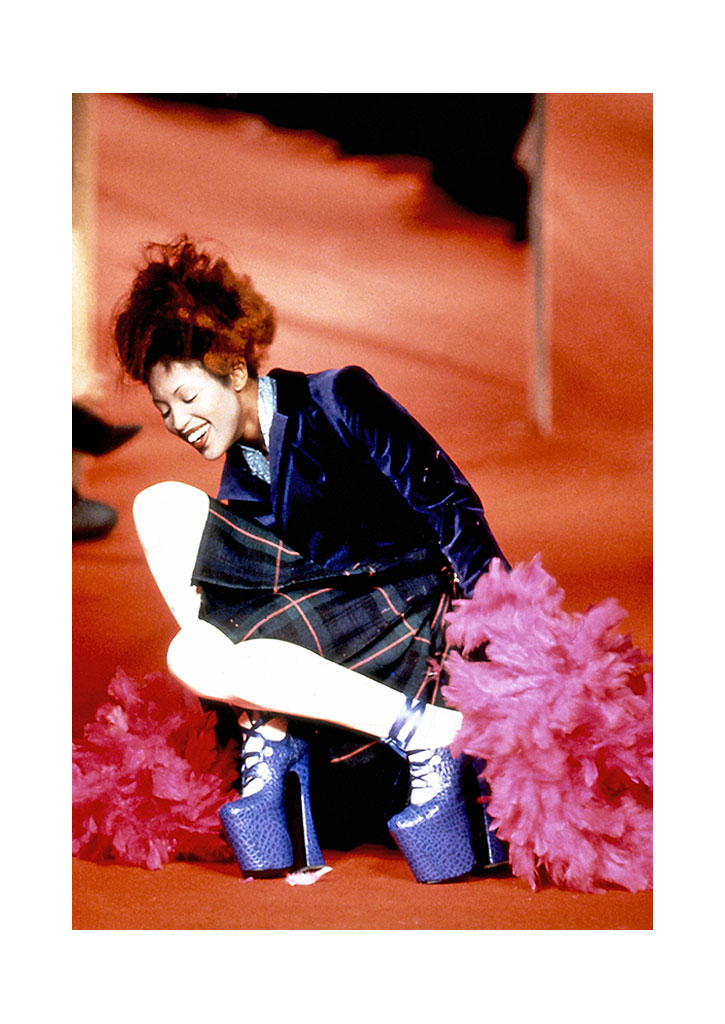 Vivienne Westwood collaborates with Swatch to create the ‘Putti’ and ‘Orb’ watches in 1992/93.

A new boutique opens at 43 Conduit Street, in central London.

Vivienne is appointed Professor of Fashion at the Berliner Hochschule der Künste in 1993.

Vivienne channelled her creative nature into producing her own tartan for the ‘Anglomania’ Autumn-Winter 1993/94 collection and invented her own clan, MacAndreas. The Lochcarron of Scotland officially recognized the clan, which is a process that normally takes 200 years, a huge achievement for Vivienne.

A three-part Channel 4 series, Painted Ladies, was broadcast in 1996 examining the relationship between fashion and art. Vivienne looked at the costumes depicted in the art of the classical, mediaeval and renaissance periods.

Vivienne Westwood’s debut fragrance ‘Boudoir’ launches in 1998. It was developed in conjunction with world-famous ‘nose’, Martin Gras of Dragoco. “My perfume is called Boudoir. A boudoir is a dressing room and a place to get undressed. It signifies a woman’s space, a place where she is on intimate terms with herself, where she sees her faults and her potential” (Vivienne).

The Vivienne Westwood MAN label launches in 1996 in Milan.

A Vivienne Westwood licensed boutique launches in Tokyo, Japan, a first outside of the UK.

‘Anglomania’ launches in 1998 as its own diffusion line, taking inspiration from the Vivienne Westwood archive collections. The youthful collection pays homage to Westwood’s iconic tailoring and draped silhouettes and includes styles from the SEX, Pirate, Mini-Crini and Bondage collections.

The exhibition ‘Vivienne Westwood: the collection of Romilly McAlpine’ opens at the Museum of London from April to June 2000.

In 2002, Vivienne Westwood opens a boutique in Hong Kong and two in Korea.

In 2003, the house collaborates with the English fine china, porcelain, and luxury accessories manufacturer Calport for the Westwood Home Collection.

A new Vivienne Westwood flagship boutique opens up in Milan, Italy in 2003.

In 2004 the Victoria and Albert Museum hosts a retrospective exhibition celebrating Vivienne Westwood’s contribution to fashion. This was their first exhibition of its kind.

Moet & Chandon Fashion Tribute honours Vivienne Westwood as the first fashion designer to have a solo exhibition at the V&A.

Vivienne Westwood begins a long-term collaboration with The Rug Company designing rugs and cushions in 2005.

Vivienne visits Buckingham Palace for a second time to meet his royal highness Prince Charles, the Prince of Wales to accept her Damehood in 2006.

The Made in Kenya collaboration launches in 2010, as a partnership with the United Nations in support of the Ethical Fashion Initiative and Artisan Fashion. 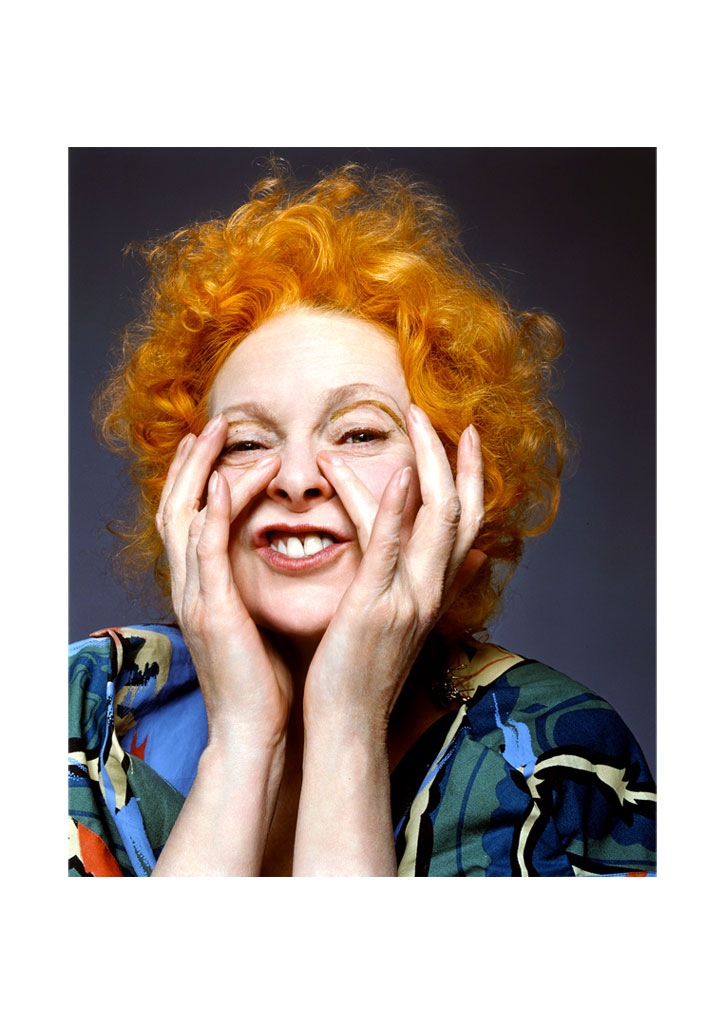 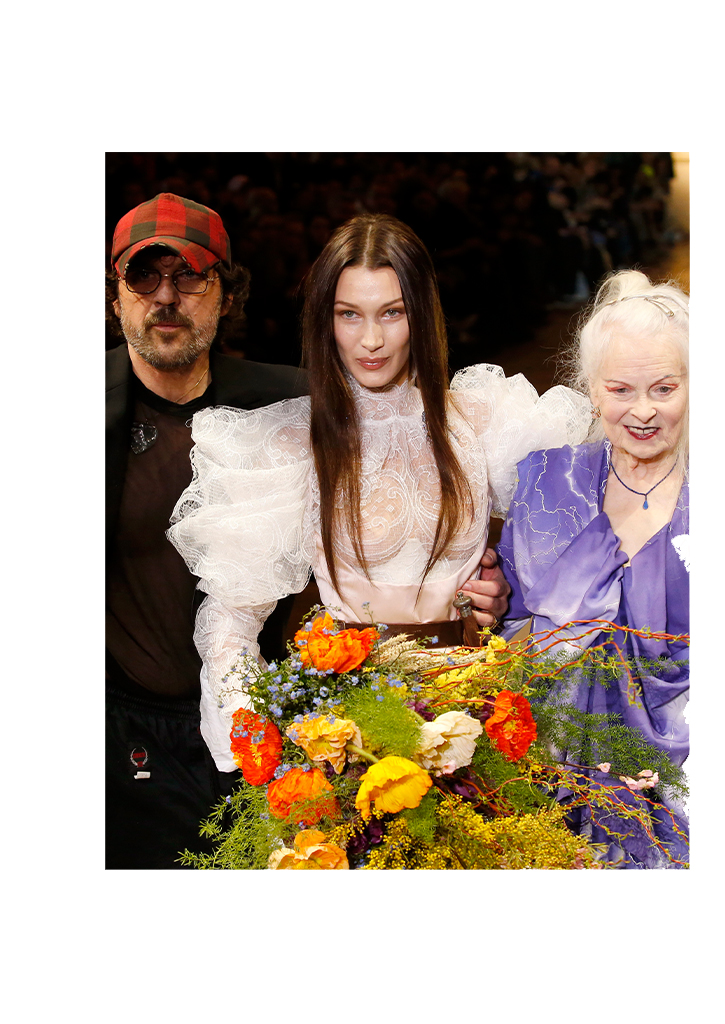 The Vivienne Westwood New York and Paris flagship boutiques open their doors in 2016.

The Ginza Six flagship boutique opens in Japan in April 2017, with the same concept as Paris.

A flagship boutique on Patterson Street in Hong Kong opens in November 2018.

The Vivienne Westwood X Buffalo collaboration launches in May 2019.

The Vivienne Westwood X Eastpak ‘SAVE OUR OCEANS’ collection of bags and accessories launches in July 2020.

Vivienne Westwood partners with environmental not-for-profit Canopy for 2020 World Earth Day in their campaign to protect forests through fabric choices.

Both the Vivienne Westwood Shanghai and Beijing Flagship boutiques open in December 2021.

The last physical Vivienne Westwood mainline show took place at Autumn-Winter 2019 London Fashion Week. From then on it was decided to go digital, for environmental reasons.

“I have designed with Vivienne for more than 25 years. To add my name is to emphasise and clarify the differences between our lines. It is not a big change to the way we work but it will bring a new direction and I am happy and excited for the future.” – Andreas Kronthaler

“Over the years Andreas has taken on ever more responsibility and I wish this fact to be reflected in public perception.” – Vivienne Westwood