To mark her 80th birthday, Vivienne Westwood has created a short film — ‘Do Not Buy a Bomb’ — for screening on the Piccadilly Lights, at London’s Piccadilly Circus. The ten minute artwork was presented by CIRCA on the famous illuminated hoardings at 20:21 BST on 8th April, pausing its usual advertising messages, and is  available to watch online at CIRCA’s website .

In the film, Vivienne performs a rewritten version of ‘Without You’ from My Fair Lady and offers a stark warning of societal indifference to the looming environmental catastrophes, as well as calling out the arms trade and its links to the climate crisis. She ponders an England without people and challenges audiences to ‘Tell the children the truth’, singing:

‘What a fool I was, what a dominated fool
/ To think that you were the Earth and the sky…’

Created by artist Josef O’Connor, CIRCA commissions a different artist each month to present new ideas on the huge Piccadilly screen. Vivienne’s one-day special commission follows pieces by Patti Smith, Tony Cokes and James Barnor, whose work is being shown every other evening in April.

“Vivienne Westwood has a long history of addressing issues including climate change, civil liberties and nuclear disarmament, provoking others to think afresh and reflect or consider their own actions,” says O’Connor. “We are honoured to provide a platform to this British icon on the Piccadilly Lights screen and celebrate her 80th Birthday in style.” 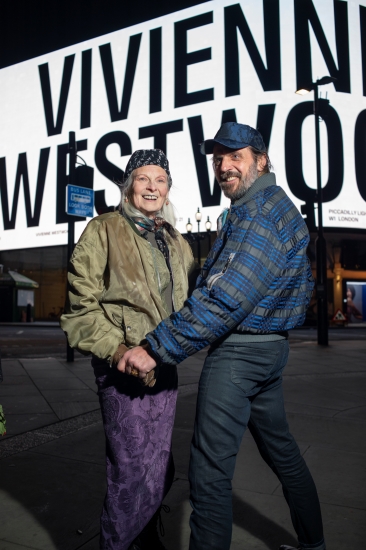 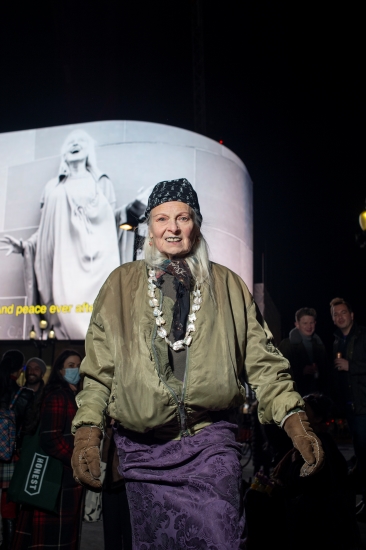 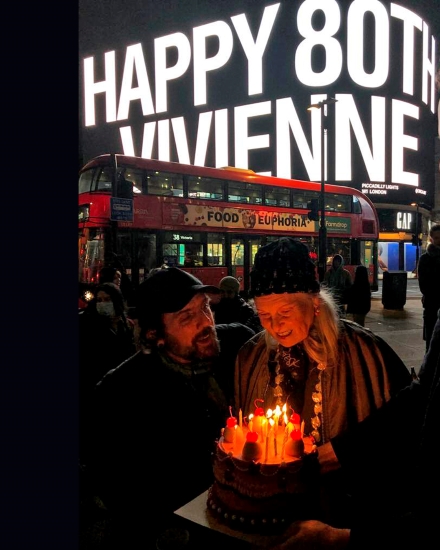 “I have a plan 2 save the world,” writes Vivienne. “Capitalism is a war economy + war is the biggest polluter, therefore [we need to] stop War + change economy 2 fair distribution of wealth at the same time… Let’s be clear, U + I can’t stop war just like that. But we can stop arms production + that would halt climate change + financial crash.”

“April 8th is my 80th birthday,” she continues. “Please read the Manifesto + Diaries + follow the playing cards 2 find out how life changing the new economy will be. Read over + again 2 realize how simple + radical the plan is, then U will change your pattern of life + by talking U will support me in the fight.” 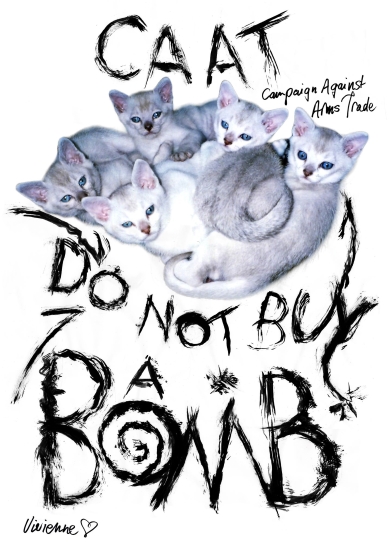 ‘Do Not Buy a Bomb’ has been created in support of the Campaign Against the Arms Trade. A special limited-edition print by Vivienne Westwood with the same title is available buy via the Circa website until 8 May 2021, with proceeds supporting the UK’s cultural community in a post-COVID world. Read more about Vivienne’s campaigning activities at the Climate Revolution site.