Over time, pearls have made their way down from the upper echelons of the class system and have now infiltrated the mainstream. Vivienne Westwood’s use of pearls and the punk movement have played a part in this cultural shift, turning it on its head, whilst keeping their rich history ever pertinent to their meaning.

Standing the test of time, pearls have remained a part of a discourse spanning centuries. Art works including Renaissance paintings such as Johannes Vermeer’s Girl with a Pearl Earring and Venus (the goddess of love) as depicted by Vignon most famously portrayed the precious mineral.

“I thought the idea of one pearl earring or…three strands of pearls with a pearl drop in the middle was typical of all jewellery. You could fit it with practically any period and it would look great. So I chose things in that way, I wanted them to be complete, and as archetypal as they could be.” – Vivienne on ‘Portrait’.

For centuries, pearls, also known as the ‘queen of gems’ have been regarded by many cultures as one of the most precious natural minerals on the planet.

It is believed that they were first discovered by people looking for food along the seashore. The world’s oldest gem has been admired since long before written history. The legend is that they were created from dewdrops swallowed by oysters. Fragments of pearls were found in the sarcophagus of a Persian princess, which dates back to around 420 BC.

They were given as gifts to Chinese royalty in early 2300 BC. In ancient China, pearl jewellery signified the purity of the wearer. In the Dark Ages, knights used to wear them on the battlefield, believing that the pearls would keep them safe.

The Latin word for pearl is “margarita”, meaning something very precious. Since the Roman era, pearls have been an essential trade commodity. In ancient Rome, they were regarded as the main status symbol. Julius Caesar even passed a law banning non-royals from wearing them.

After the discovery of this precious gem in South and Central America in the 15th and 16th Centuries, it didn’t take long for pearls to land on European shores and be sold to members of the elite. During the Tudor reign, Henry VIII, known for his love for opulence, had pearls sewn into items of his clothing. His love for pearls was inherited by his daughter and successor Elizabeth I,  who would wear them as a symbol of power. This moment in history later became known as the ‘Pearl Age.’ 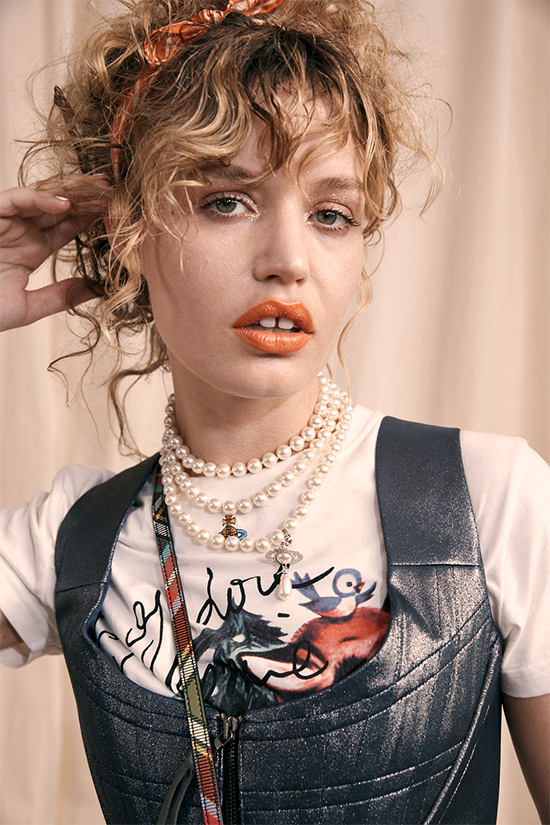 While we appreciate the cultural significance and meaning of pearls, we are also aware that pearl farming can be an unsustainable practice. This is why the house opts for lower impact glass-based or resin pearls as an alternative.

The Three-Row Pearl Pearl Drop Choker first seen in the ‘Portrait’ Autumn-Winter 1990 collection was influenced by Vivienne’s love of the French paintings, ceramics and furniture assembled by the Marquis of Hertford in the nineteenth century and housed at the Wallace Collection.  The opulent fabrics of the collection complemented by the classic Westwood pearl jewellery reflected the richness of the qualities found in those artworks.

“I thought the idea of one pearl earring or…three strands of pearls with a pearl drop in the middle was typical of all jewellery. You could fit it with practically any period and it would look great. So I chose things in that way, I wanted them to be complete, and as archetypal as they could be.” – Vivienne on ‘Portrait’. 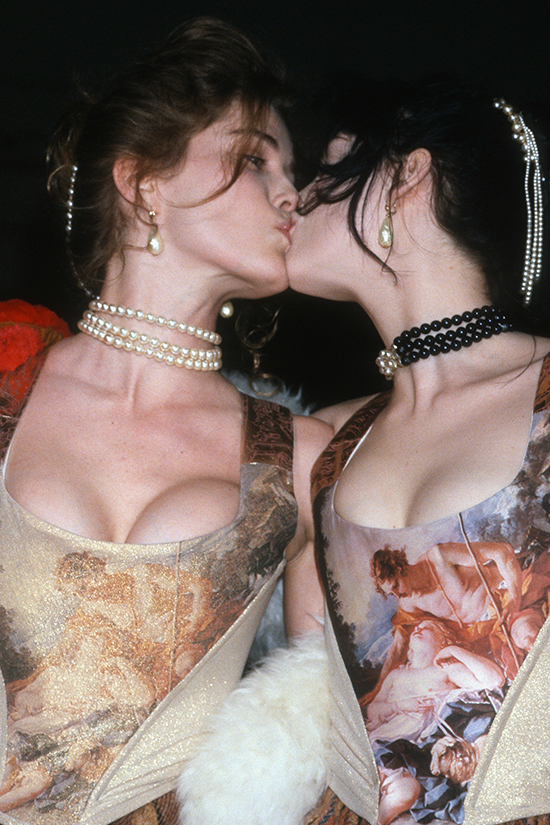 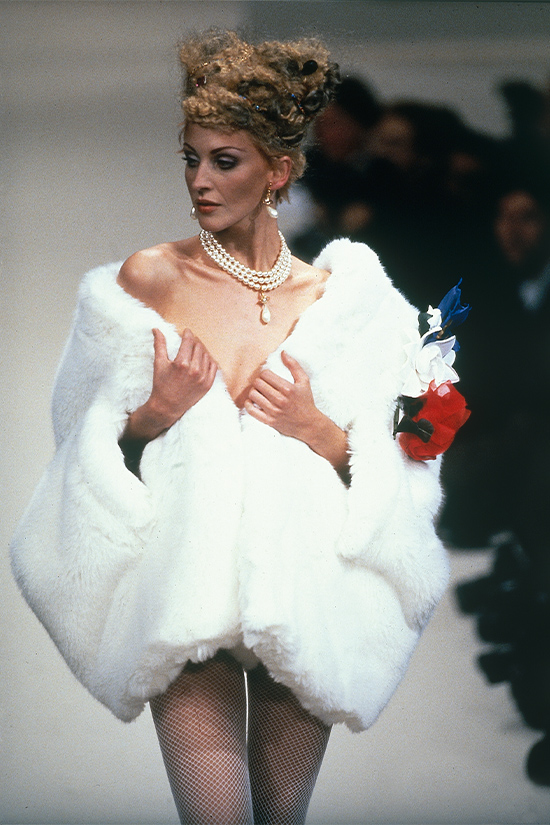 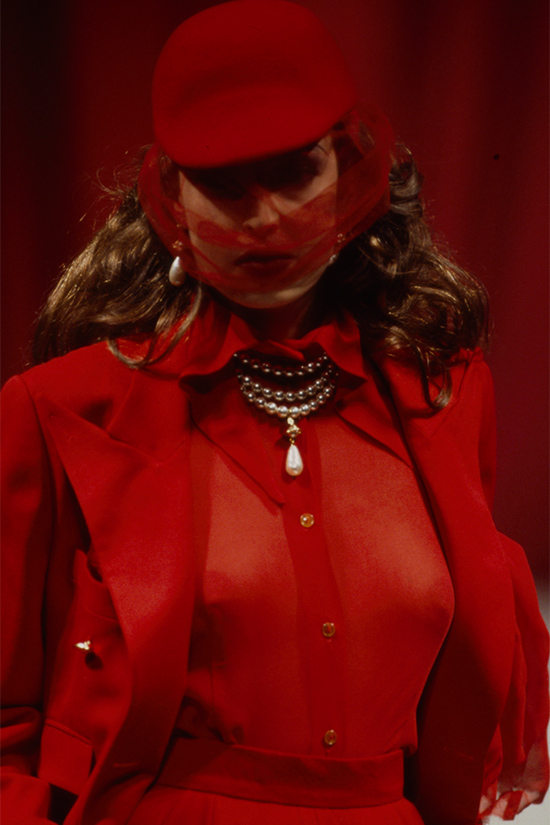 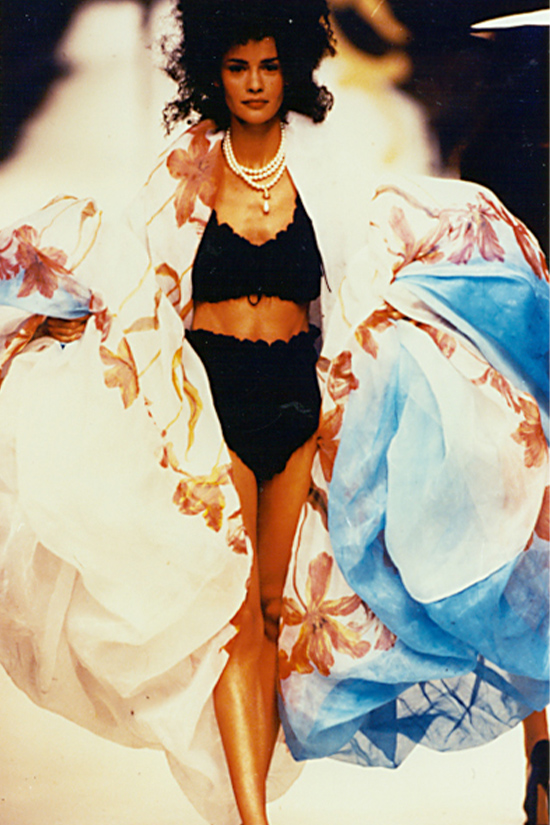 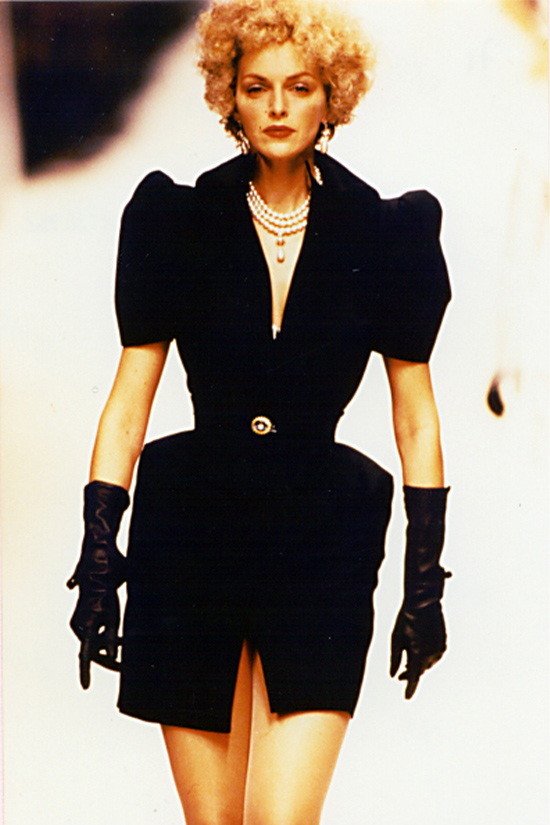 Vivienne’s work is often characterised by her readiness to question and challenge the status quo. In the ‘Harris Tweed’ Autumn-Winter 1987/88 collection, she played with stereotypes of ‘Britishness’, the upper class, and the monarchy. The show featured stiff, Queen-like curls, milliner Stephen Jones created a spoof of the Queen’s crown, in the shape of a soft hat and all accessorised with strings of pearls. In true Westwood fashion, pearls weren’t exclusively styled on the female models, the men also went down the catwalk with pearls around their necks.

The Spring-Summer 2022 Three-Row Pearl Bas Relief Choker consists of three tiers of 92 glass-based pearls made by Swarovski. Knotted by hand, this choker features a signature brass orb front and centre and is available in both gold and silver tones. 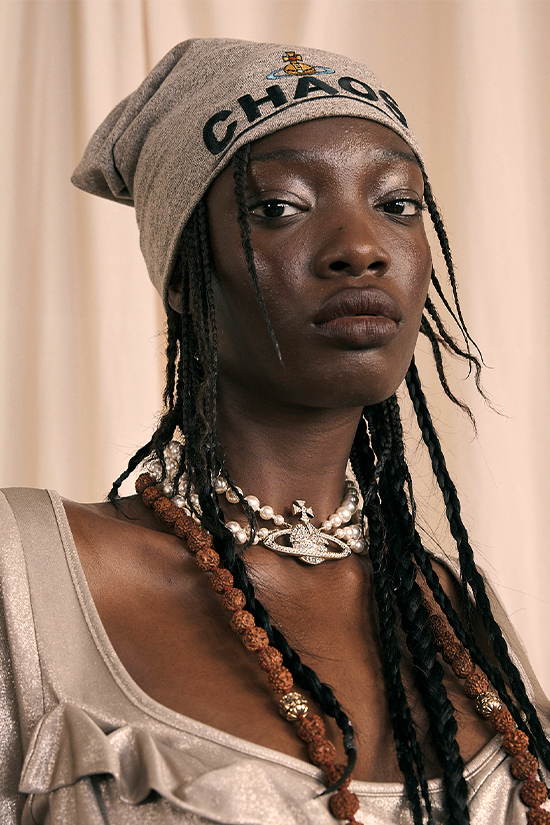 The Vivienne Westwood Pearl collection is available in selected boutiques and online.